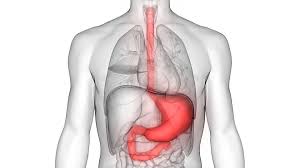 When a food substance is ingested (put into the mouth), mastication (chewing) is done to break the food physically. Saliva from the three salivary glands is secreted and it mixes with the food to enable easy swallowing. The saliva contains salivary amylase (ptyalin) which chemically breaks down the starch components of the chewed food and converts it into maltose; hence the first stage of starch digestion begins in the mouth.

Through the contraction and relaxation of the muscles of the oesophagus known as peristalsis, the food substance moves from the mouth into the stomach.

The stomach is a muscular sac in which food substances are temporarily stored and passed on at sufficient quantity into the small intestine for further digestion. In the stomach, starch digestion stops and protein digestion begins. The walls of the stomach secrete gastric juice which contains enough Hydrochloric Acid. The function of the acid is to kill harmful bacteria that may be present in the food; it also stops the digestive action of ptyalin on the food substances. The gastric juice also contains pepsin and rennin. Pepsin is responsible for breaking proteins in food substances and converting them into peptides. The rennin (abundant in infants) converts liquid proteins (caseinogen) in milk into solid proteins (casein).

The food substance then moves into the first portion of the small intestines called Duodenum by muscular contractions of the walls of the stomach. The pancreas, located close to the duodenum secretes a watery alkaline juice. This pancreatic juice contains three enzymes namely; Pancreatic amylase, pancreatic lipase and trypsin, a protease.

The pancreatic amylase converts remaining undigested starch to maltose, while the pancreatic lipase acts on emulsified fats and converts them into fatty acids and glycerol. Finally, the trypsin also causes the breakdown of remaining protein to peptides. It is important to know that, fats and oil digestion begins and ends in the duodenum. The liver produces and stores in the gall bladder, a greenish alkaline liquid known as bile. It is responsible for breaking down fats into droplets to enhance digestion. After these actions, through peristalsis, the food moves into the second and longest portion of the small intestine – ilium.

Digestion ends in the ilium. The walls of the ilium produce a digestive juice known as succus entericus. This juice contains the enzyme maltase, which breaks down the maltose to glucose. Also, a protease known as erepsin breaks the peptides to amino acids.

The products of digestion – glucose, amino acids and fatty acids and glycerol, enter the blood stream by diffusion through fingerlike projections in the ilium called villi. In the bloodstream, the absorbed glucose and amino acids are transported to the liver to be stored. Absorbed fatty acids and glycerol are stored in adipose tissues under the skin, around the heart and other organs. In the liver, excess glucose is converted into glycogen and excess amino acids are turned into a nitrogenous compound known as urea. Other food nutrients such as mineral salts and vitamins are directed absorbed into the bloodstream. The blood transports all these food substances to all tissues and organs to be used in a process known as assimilation.

Undigested food move into the colon where excess water is absorbed to leave it a semi-solid state known as faeces. The faeces move into the rectum which is subsequently egested out of the body through the anus.