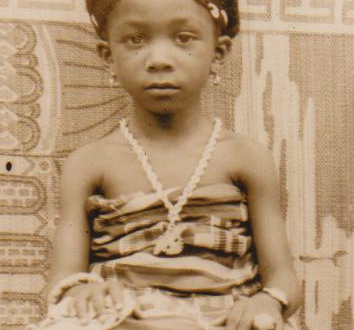 Dr. Marian Nkansah is a Dr. Nkansah is a senior lecturer in the Chemistry Department of the Kwame Nkrumah University of Science and Technology, Kumasi -Ghana (KNUST). She obtained her Ph.D. in environmental chemistry from the University of Bergen, Norway, and her MSc. and BSc. in chemistry at KNUST. She studied science at St. Roses’ Secondary School in Ghana. She is also a member of The Exploratory’s Council of Advisors. Read more about her here. This is an invited submission to our Letter to My Young Self series.

I am happy to write to you again after such a long silence. I am very well, and I hope you are too? The second month of the year 2017 just ended, and I hope you have not given up on your dreams.

I want to share with you a dream I had last night. In the dream, I had time traveled back into the 80’s. There, I discovered a family of eight, the parents, their three sons and their three daughters. Among the children was ‘little Marian’, your namesake who was the second daughter and the fourth of the six children.

It was a close-knit family, and both parents were educators at different levels. The children grew up around books because of their parents’ professions. The family lived in a bungalow on a school campus and maintained a backyard farm made up of crops, chickens, and turkeys. These activities brought the children closer to nature. Little Marian, in particular, enjoyed running in the woods and hunting all sorts of insects. She also loved to watch hens tend their young ones. Inside family stories were told of little Marian staging in school plays when she was three years old. She also enjoyed poetry recitals and role-play during open days in school. There were even stories that when she was barely four years, teachers sometimes left the class in her care when they needed to step out for a moment. Many people believed little Marian would become a leader one day, and possibly a teacher like her parents.

Little Marian loved the living things around and was intrigued by how they came into being and continue to exist. In school, she enjoyed subjects such as general science, agricultural science, geography, and environmental studies. Little Marian also enjoyed English because of her love for reading and poetry.

One fine afternoon after school little Marian decided to embark on a little adventure. She changed into her housedress, put on her favorite straw hat, and off she went into the woods. There she admired colorful butterflies, grasshoppers, beetles, and various fruits. As she wandered, she came across an unusually big mango fruit, which was lying several meters away from the tall mango tree in the middle of the woods. Excited and curious at the same time, little Marian attempted to pick up the mango. As soon as her fingers touched the fruit, a Genie appeared and the following conversation ensued:

Genie: Hey little Marian. Why do you bother me this afternoon? I was having a nap.

Little Marian: Aw Genie, I didn’t mean to disturb you. I was only having my usual after school walk when you startled me with your smokeless flame appearance.

Genie: Now that you have woken me up, what can I do for you? Make one wish.

Genie: Oh, little one. You have asked for a good thing. What you have asked for is called SCIENCE. People who practice in this field are called SCIENTISTS. There are very few of your kind – GIRLS – who pursue science, but once you make up your mind, you can do it. You will be discouraged by those who are afraid of trying and by those who tried, failed, and gave up. Do not pay attention to these people and rather listen to the voice from within and that of your parents who taught you how to read and write.

A few years later, little Marian attended one of the best girls’ high schools in the land to study general science. She later went to the best university of science in the country which served as the beginning of a successful career in science. She obtained her Bachelors as well as Master’s degrees from this same university. Little Marian, now all grown up, holds the highest academic qualification attainable called a Doctor of Philosophy Degree in Chemistry after her studies abroad. She is now a senior lecturer at the same university where it all began. She is a member of the Council of convocation and also in charge of the largest female hall of residence called the Africa Hall. She has gained some professional recognition over the years: She is a member of the Ghana Young Academy, an affiliate of the African Academy of Science and member of the Royal Society of Chemistry. She was recently named the first recipient of the F.M. Al-Kharafi TWAS prize for women in science.

My dear Marian, the crows of a neighborhood cock woke me up only to realize it was all but a dream. I hope you have enjoyed reading my story.

As I always do in my letters, I want to encourage you to take your studies seriously and continue to listen to Mum, Dad, and your teachers. Finally, do not stop dreaming and remember, dreams come true.